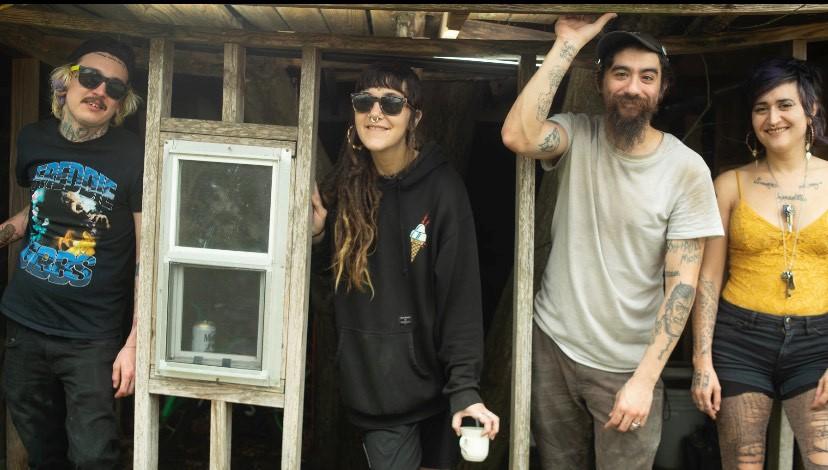 Days N Daze formed as a duo in 2008. Band founders Whitney Flynn and Jesse (Je-C) Sendejas performed their first set of original music (and a killer cover of Neutral Milk Hotel’s „Communist Daughter“) for a handful of listeners at a San Marcos, Texas coffee shop that year. They’ve remained the heart of the group, several band members, dozens of songs, numerous side acts and millions of tour miles later. Longtime members Meagan Melancon (washboard) and Geoff Bell (washtub bass) round out the Houston-based group, which begins a new decade of music with Show Me the Blueprints. Due in May, it is Days N Daze’s eighth full-length album and its debut effort for iconic punk label Fat Wreck Chords.

The album is expected to introduce new audiences to DND’s music, dubbed „thrashgrass“ for its blend of folk, punk, ska and emo music. The band’s devotion is to songwriting rather than genre. Describing what they do, New York Times bestselling author Shea Serrano called them „a goddamn menace; more violent than the Femmes, more poguesy than the Pogues. They’re a frothy, malicious, frenetic band of music mutants. And they are absolutely perfect.“ Houston Chronicle/Houston Press writer Jef Rouner dared listeners to „find a band more punk than Days N Daze“ in 2015 and called them „one-of-a-kind in a city known for inventing whole new styles of music…It’s odd but not unexpected that Days n Daze are both nationally known and at the same time deeply underground. Their sound fits into no specific category, combining the frantic energy of skate punk with big strumming guitars of an indie darling and just the barest touch of mariachi.“

The band’s breakthrough album, 2013’s Rogue Taxidermy, is still its most popular work to date. Vice/ Noisey music writer Barry Thompson called the album „a proverbial doctoral thesis in bloody-fanged acoustic punk“ and noted the album’s Phoenix-from-the ashes themes on broken relationships, writing, „To the right ear holes, Rogue Taxidermy is at least as good as Rumours, and probably much better than Tragic Kingdom…Rogue’s de facto hit—a stone-hearted celebration of solitude christened „Misanthropic Drunken Loner“—comes flanked by the apoplectic „Call in the Coroner“ and „Blue Jays,“ a song known to lull moshpit scrapers into states of pensive meditation, penned in tribute to Flynn’s departed grandfather. Other highlights include „Goodbye Lulu,“ an aural raspberry to history’s lamest street kid, and closer „Post Party Depression,“ whose title belies a defiant hopefulness. Sure, practically every city’s got at least one outfit of ex-teenage Sum 41 fans grown-up and turned busker, but with respect to whatever version of that paradigm runs amok in your town, Days N‘ Daze songs warrant discussion above and apart from any punk rock cliches.“

Days N Daze „friends, not fans“ seem to agree. They continue to congregate, at the band’s numerous live shows, bearing its signature logo or „fishbone“ emblem in tattoos and on vests and backpatches. They trade notes with the band on social media and with one another on the „Days N Daze Appreciation Society“ on Facebook. They find back catalog albums like The Oogle Deathmachine and newer releases, like 2017’s Crustfall and several splits with bands like Night Gaunts and We the Heathens. The band’s songs have been covered by hundreds of independent artists and Days N Daze YouTube hits number in the multi-millions. The official, Shibby Pictures video for „Misanthropic Drunken Loner“ has 5 million-plus hits and the song has been streamed more than 7 million times on Spotify, where the band has nearly 150,000 monthly listeners.

While Days N Daze has grown some of its audience through its artist-verified Spotify page, a long-running Bandcamp page, Pandora, Facebook, Instagram, Twitter pages, podcast appearances on punk staples like „Dispatches from the Underground,“ video work with A Fistful of Vinyl, Punk With a Camera, Bridge City Sessions and a dedicated YouTube page which occasional features band members playing Dungeons & Dragons for a web series dubbed „DnDnDnD“, it is best known for its constant touring schedule. The band has performed live in every U.S. state but Hawaii and in venues of every ilk, from basements shows to major music festivals, in the states, Canada, the U.K., Europe, Tasmania and Australia. Highlights include shows at Punk Rock Bowling, The FEST, multiple appearances at Canada’s Amnesia Rockfest and London’s Boomtown Fair. The band has played Alaska’s Salmonfest, Die Festung Rock in Germany, Punk Island in NYC, repeat appearances at Chicago’s MoonRunners Music Festival, Skatopia Bowl Bash, Hometown Hoedown in Houston and Cracktoberfest, the annual fall tour by „crackrocksteady“ progenitors Leftover Crack, a major musical influence for DND. The band is slated to join NOFX and many of its punk idols on the European leg of the Punk in Drublic Music and Beer Festival in 2020.

DND chases these pursuits while its members engage in peripheral music projects. Flynn is a solo artist and a founding member of My Pizza My World. Sendejas‘ projects include Escape From the Zoo, which he co-founded with his wife, Veronica, and Chad Hates George, which teams him with his sister, Marissa Sendejas, who was the original washboard player for DND. No matter the project, the band’s members are committed to taking the music to those who want it, all in the hopes of adding new ranks to, as Serrano wrote, „the most charming riot of all time.“